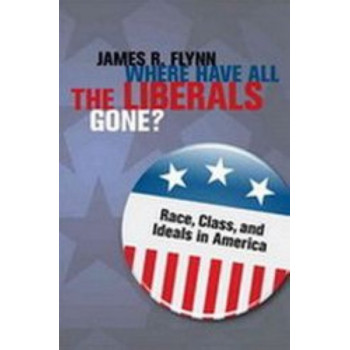 Where Have All the Liberals Gone? : Race, Class, & Ideals in America

Professor James R. Flynn is renowned for his belief that the IQ gap between black and white Americans is not genetic, but environmental in origin. Flynn's controversial new book offers an alternative to the vision of American society popularized by Herrnstein and Murray in The Bell Curve and is a must-read for all those wanting to keep up to date with the IQ debate. It traces the history of American idealism from Jefferson to the followers of Leo Strauss; analyses the black marriage market, the case for affirmative action, the folly of Iraq, and the liberal failure of will; and concludes with a powerful defence of humane ideals and human autonomy. With its clear and attractive prose, social scientists, philosophers and the general public will find this a unique and exciting book that will rearm American idealism with new ideas. Contents: Prologue; Part I. St. Thomas Jefferson: 1. Something beautiful is vanished; Part II. Blacks and the Pursuit of Happiness: 2. The lost boys; 3. What Germany did that America has not; 4. Do we want affirmative action for whites only?; Part III. Yours for a Better World: 5. Saving equality from the dustbin of history; 6. Jefferson and Social Democracy; 7. The America who would be king; Part IV. A History of Moral Confusion: 8. William James and Leo Strauss; 9. The status of the good life; 10. Choosing to be free; Epilogue; Appendix: Tables. Reviews: 'This book is a kind of autobiography in which Flynn, one of the most interesting and independent thinkers of his generation, offers his overall view of the United States: its past, its values, its problems, and its best possible future. It contains the latest on the race and IQ debate and a fascinating chapter on Leo Strauss and his followers.' Thomas W. Pogge, Columbia University 'Flynn brings moral philosophy to bear on America's political and social malaise. The result is a unique and challenging vision of an American future in which 'justice for all' has a significantly broader and more substantial meaning than it does in practice now.' William Dickens, Northeastern University and The Brookings Institution 'For decades, Professor Flynn has been among the most honorable and distinguished commentators in the world on issues of race, class, and psychology. His tenacious study of the science of intelligence and the powerful and scrupulous arguments he has produced have undermined many a fallacious theory connecting race and IQ. In Where Have All the Liberals Gone?, Flynn brings his own formidable intelligence to bear on the central problem afflicting American politics and society - the enormous disparity between the conditions under which members of different social groups participate in the pursuit of happiness. Flynn's understanding of social and psychological trends and the power and care with which he articulates our ideals of equality and freedom give him unique authority to address these issues about inequality.' Jeremy Waldron, University Professor, New York University Law School