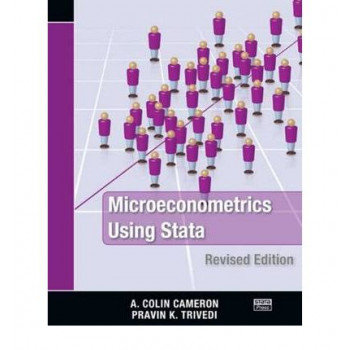 A complete and up-to-date survey of microeconometric methods available in Stata, Microeconometrics Using Stata, Revised Edition is an outstanding introduction to microeconometrics and how to execute microeconometric research using Stata. It covers topics left out of most microeconometrics textbooks and omitted from basic introductions to Stata. This revised edition has been updated to reflect the new features available in Stata 11 that are useful to microeconomists. Instead of using mfx and the user-written margeff commands, the authors employ the new margins command, emphasizing both marginal effects at the means and average marginal effects. They also replace the xi command with factor variables, which allow you to specify indicator variables and interaction effects. Along with several new examples, this edition presents the new gmm command for generalized method of moments and nonlinear instrumental-variables estimation. In addition, the chapter on maximum likelihood estimation incorporates enhancements made to ml in Stata 11. Throughout the book, the authors use simulation methods to illustrate features of the estimators and tests described and provide an in-depth Stata example for each topic discussed. They also show how to use Stata's programming features to implement methods for which Stata does not have a specific command. The unique combination of topics, intuitive introductions to methods, and detailed illustrations of Stata examples make this book an invaluable, hands-on addition to the library of anyone who uses microeconometric methods.