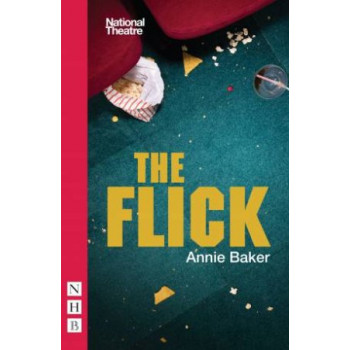 Annie Baker's Pulitzer Prize winning drama about three cinema attendants 'Wondrous, devastating, hilarious, and infinitely touching. A play to be treasured' New York Times. In a run down movie theatre in central Massachusetts, three underpaid employees mop the floors and attend to one of the last 35 millimetre film projectors in the state. Their tiny battles and not so tiny heartbreaks play out in the empty aisles, becoming more gripping than the lacklustre, second run movies on screen. With keen insight and a finely tuned ear for comedy, The Flick is a hilarious and heart rending cry for authenticity in a fast changing world. The Flick arrived at the National Theatre, London, in 2016, direct from New York, where it won the Pulitzer Prize for Drama. It went on to win Best New Play at the 2016 Critics' Circle Awards. 'Annie Baker's play is not just good. It is not just new. It's a new sort of good' - Observer 'Astonishing... The beauty of Baker's play lies in its portrait of three quietly desperate people... This is like no other play in London. It moves at its own unhurried pace and magically exposes the souls of lonely people in danger of being left behind in our new, digitised age' - Guardian 'A portrait of a generation struggling through life without moorings, that also beautifully and often hilariously observes the strange, fragile nature of work friendships, enforced intimacy with virtual strangers' - Time Out 'An understated epic of dreams, disappointment and tenacity by America's greatest living dramatist' - The Stage 'What makes The Flick so original and captivating is the way form really does match content... [conjures] a stillness that is almost like a painting, rewarding patience, forcing you to pay attention. It's a mighty achievement' - WhatsOnStage 'Wondrous, devastating, hilarious, and infinitely touching. A play to be treasured' - New York Times 'The Flick offers that beautiful, exquisitely alive feeling you get during the best moments of theatre ' that life is too wonderful to be believed' - New Yorker Best New Play, Critics' Circle Awards Pulitzer Prize for Drama Susan Smith Blackburn Prize